3.24.16-Holy Thursday sermon-Jesus shares one last meal with his disciples-So when Jesus shared the Last Supper with you tonight. How close were you standing to Jesus?
Some disciples, who had been following John the Baptist, were standing close enough to Jesus at his baptism to change direction. Maybe it was the dove descending from heaven-maybe it was Jesus himself-maybe they actually heard the rumble of thunder as the voice of God pronouncing God’s pleasure with Jesus’ actions. You must listen and be prepared to hear God’s quiet voice. It will point you in the direction you should go.
While some of Jesus’ disciples had followed John, Jesus went to the seaside to call some of his own. Were you standing close enough to hear the conversation between him and the fishermen-the call to follow, the promise that they’d now be fishing for people? In overhearing these words, did you want to drop your nets and follow, too? What stopped you from following? Why are you waiting along the sidelines?
While Jesus and twelve disciples traveled throughout Galilee and into Judea as far as Jerusalem, the crowds followed, went home, followed and went home. While they crushed in around Jesus to hear what he was saying, they also came looking for what he could give them. Healing, acceptance, bread, fish-Jesus even promised them living water, but they didn’t understand.
Everybody came for something. Some came for the superficial and turned to run home when the going got tough or they felt threatened or they were asked to join Jesus’ disciples. But the word disciples comes from the word discipline, which means a routine and a commitment of time. This teaching is too hard, they grumbled, turned around and went home.
When Jesus turned to look back, the crowds had disappeared and once again, he was left with only twelve following him. Will you go away also, Jesus asked. But Peter came up with the answer Jesus was looking for. “Lord, to whom shall we go? You have the words of eternal life. We have come to believe you are the Holy One of Israel.” And in all honesty, this is what the disciples believed, although they had a terrible time acting as though they believed it.
Where were you sitting at the table during the supper, crowded in around Jesus or lounging along the outside edges? Were you sitting close enough that you were the first stunned disciple to see Jesus start washing your feet? Did you pull away or did you watch quietly?
I think when it comes to Jesus it’s better to watch and listen to him explain why he’s doing something than to put up a big protest. Sometimes our mouths make promises we can’t keep. And other times, our ignorance separates us from the God who loves us more than anyone ever could.
Were you sitting close enough to see Jesus hand Judas the bread of betrayal? Before Jesus said it, did you have any idea what Judas had been doing behind your back? Or did you just keep your mouth shut and watch what had been happening, thinking it was none of your business. 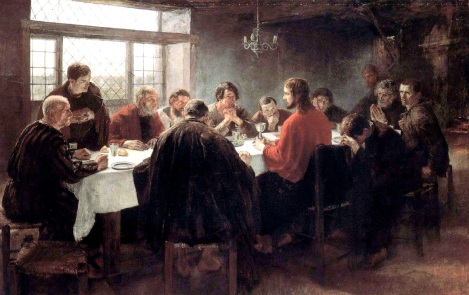 If you have been sitting on the sidelines, watching what’s been going on, maybe it’s time you realize that the story I’m telling you is a timeless story for the past, present and future. The question remains; how close are you standing to Jesus?
Jesus offered the laying on of hands for healing and forgiveness like we offered tonight. You can’t be healed unless you are also forgiven; when this happens, God heals all the broken pieces and makes us whole again. It’s why baptism is for the forgiveness of sins. Sometimes, we receive forgiveness from other people. Sometimes, this means being able to forgive yourself. Either way, it’s important.
In a while, we’ll celebrate the sacrament of Holy Communion, remembering the smells of food and wine that lingered at the last supper in the upper room. Every disciple, including Judas, ate bread at Jesus’ table. Every disciple had his feet washed by their rabbi, their teacher and master. This should have been a symbol of unity between them as Jesus lead them into Jerusalem, but shortly after the whole group starts to unravel. As much as they want to stay, they’re afraid of what’s coming next. Judas stood up and left, the first of the disciples to turn away and leave Jesus this night. Later, Peter would deny Jesus and they would scatter, running for their lives in fear and terror. In the end, the only man to enter Jerusalem would be Jesus, goaded on by soldiers, pushed by the crowds demanding his life. In the end, only Jesus would hang on a cross. And in spite of this seemingly sorrowful end of life, it was the only way that new, eternal, kingdom life could begin.
So how close are you to Jesus today? Are you standing in the shadow of the Holy Spirit at his baptism? Are you resting against him as you share one last meal around the common table? Are you letting him wash your feet when everything in you is saying you should be washing his instead? Are you standing in solidarity, at the foot of his cross so he doesn’t die alone? Are you standing close enough to understand and feel the cost salvation? Amen.